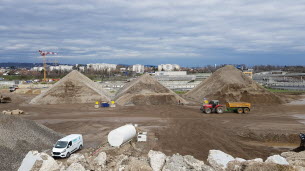 The demolition of a house or a building, the repair of a road produce a large amount of inert materials. The Fillot plant, owned by the Eurovia company, located in the municipalities of Pierre-Bénite and Irigny, receives them, classifies them and then recycles them in the form of aggregates. Here 1,000 tons of materials are unloaded every day, 250,000 tons are recovered every year.

Once recycled, they are reused in the construction of buildings, structures, roads. Eurovia, one of the French leaders in the production of aggregates, launches its new brand, Granulat +, deployed in 130 locations throughout France, including Pierre-Bénite.

The idea is to ensure a quality level and a sufficient mesh to be integrated into a short-circuit logic. The waste brought to the Pierre-Bénite site comes from construction sites in the Lyon crown.

Once they have been recycled into aggregates, it is within this same perimeter where they will be used again.