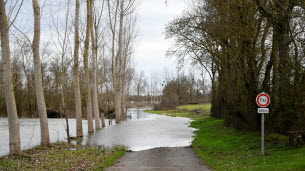 Although meteorologists recorded rainfall volumes well above normal for the month of January, the rivers took the opportunity to leave their beds. The overflows of the Rhone, Ain or Saona have caused the closure of several roads throughout the department.

This Wednesday, the rains have calmed down, the rivers have dropped a bit. The Ain has thus lost its yellow vigilance in the face of floods, which is not yet the case of the Saona.

However, the tributary has lost a few centimeters, but it is still in danger, especially north of Val-de-Saône. In fact, many fields, paths and meadows along the river have spent the day underwater, such as in Feillens, Vésines, Replonges, Saint-Laurent-sur-Saône or Manziat.