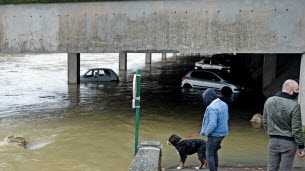 The Saone and the Rhone appear in yellow, this Tuesday night, in Lyon and upstream of the capital of the Gauls on the maps of Vigicrues, a site managed by the Central Hydrometeorological Service and support for flood prediction (Shapi) . Yellow, for yellow surveillance: this classification indicates a risk of flooding generating overflows, on a scale with four levels ranging from green (no surveillance required) to red (risk of a major crisis). However, caution is required for activities along the waterways in question.

“Flood wave in the upstream basin”

Continuously increasing for several days, the level of the Saone should increase even more in the next few hours. “The propagation of the flood wave generated in the upstream basin has a lasting effect on the increase in levels in the stretch of the Saone in Lyon,” says Vigicrues.