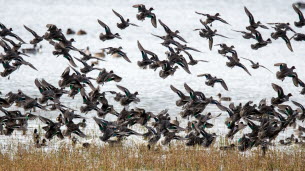 “You cannot see it anywhere else in the region. More than 11,000 birds are currently gathered in the Grand Birieux pond. Waterfowl, mainly ducks, that make a stopover in the Dombes and will leave in a few days ”, says Adelyne Zegna-Rata, head of communications for the Dombes community of municipalities.

A stage of the great migratory movements

Each year, the site hosts on average more than 30% of the Anatidae (ducks, geese, etc.) present in Dombes during international counts carried out by the League for the Protection of Birds (LPO) in mid-January. “But Grand Birieux is also a privileged stopover point during the main migratory movements, from late summer to late March,” continues Adelyne Zegna-Rata.

“It is an impressive natural phenomenon that recalls the importance of the Dombes ponds for regional, national and European biodiversity. At a time of climate change, which is an additional threat to wetlands, the French Biodiversity Office (OFB) and the Comcom de la Dombes wish to share this moment of nature to reflect also on their fragility. “

Le Grand Birieux is an emblematic site on the territory with 148 ha, including almost 70 ha in the water. In summer, it is also endowed with great biological and particularly ornithological wealth. Unfortunately, for several years, like many ponds in Dombes, it has had trouble filling due to a recurring water deficit.

“The pond is not open to the public”

“The pond is not open to the public. To better observe these birds, without scaring them away, Dombes Tourisme, the Dombes tourist office, organizes nature walks. The next ones will take place on February 2 and 6, 2021 on the occasion of World Wetlands Day ”, concludes Adelyne Zegna-Rata.

Starting next summer, an observatory will be open to the public. You will then make the most of those shows. This observatory will be the result of a partnership between the OFB, the Department of Ain and the AURA Region, within the framework of the Dombes Val de Saône Territory Contract. The comcom de la Dombes and the municipality of Birieux will be associated with this project.