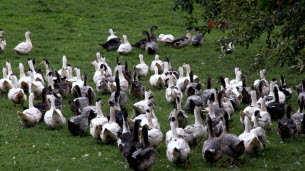 According to the latest ministry report, as of January 25, France had 409 outbreaks of avian influenza (commonly called bird flu), the vast majority of which in the southwest (386).

A first case was confirmed in early December on a duck farm in the Landes. Since then, the identified outbreaks have continued to increase. To date, there are 312 in the Landes, the leading department in the production of foie gras.

What helps for breeders?

“Our support to the breeders will be total and I want it as quickly as possible,” said Mr. Denormandie, promising “the deposits paid quickly to the breeders for which we had to do these depopulations.” “Then we will see compensation for operating losses,” he added.

The foie gras sector, represented by the interprofessional organization Cifog, asks that the compensation paid by the public authorities “take into account the losses related to non-production due to the establishment of longer drag spaces on the farms, cover the losses of hatcheries, as well as the economic consequences for private raw material processing companies after the closure of farms. “

At the same time, Cifog has repeatedly called for the strengthening of human resources to accelerate the killings. According to its director, Marie-Pierre Pé, it was sometimes necessary to “wait up to ten days” for teams to intervene on infected farms. “The dead are collected every day,” he lamented, estimating that it would be necessary “to study the means to kill sick animals faster.”