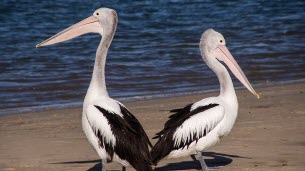 The Senegalese authorities announced on Wednesday the “suspension” of public access to the Djoudj ornithological park after the death of at least 750 pelicans, a massacre unrelated to a recent outbreak of bird flu, according to the first elements of the report. .

“This January 23, following a patrol, a high mortality was noted: 750 pelicans (740 youngsters and ten adults),” the Ministry of the Environment said in a statement.

One of the main attractions of the country

Created in 1971, with an area of ​​16,000 hectares, the Djoudj National Bird Park (PNOD) has been classified since 1981 as a World Heritage Site by UNESCO. It is one of the main attractions of the country for lovers of green tourism.

Located in the north of the country, some sixty kilometers north of Saint-Louis, in the Senegal delta in the Sahel, the park is made up of a succession of wetlands, savannas and numerous channels, lakes, basins and swamps. There are almost 400 species of birds, or more than three million individuals.

To determine the cause of death of the pelicans, the ministry ordered “an autopsy to be carried out on site and samples taken” that were “sent” for analysis at a national laboratory, according to the statement.

Pelican carcasses and waste have been destroyed and public access and canoe trips in the park backwater have been suspended.

The authorities have already ruled out the hypothesis of bird flu, from which a recent outbreak in a poultry farm in the west of the country was officially circumscribed, as the cause of this unusual mortality of Djoudj pelicans.

“Bird flu only affects grain-eating birds. Pelicans eat fish. We cannot say that it is this disease,” said the national director of national parks, Bocar Thiam.

“We must wait for the results of the analyzes that will be available in four days,” he said.