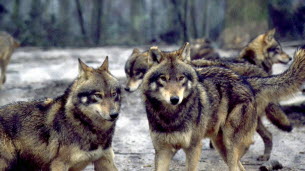 What happened to the “wolf of Valberg”? The discovery of his GPS beacon, a unique model in France, today leads several associations to believe that he was shot by poachers.

This radio collar, deactivated, was discovered on January 22 in Plan-de-Baix (Drôme) in the south of Vercors, deposited anonymously, near his home, by a former pastor, a sympathizer of various associations.

Since then, the Drôme branch of the French Biodiversity Office (OFB) has confirmed that it was the one carrying the “Valberg wolf”.

In the fall of 2019, in this town in the Maritime Alps where it had been seen several times, an isolated wolf cub had been captured and placed under observation by OFB agents.

In late summer 2020, the state announced that it had been discreetly released into the wild, equipped with a GPS tag to be able to locate it, and during the fall, the Departmental Federation of Hunters (FDC 26). has announced its presence in the Drôme, with photos.

On December 7, on the basis of anonymous intelligence, the FNE informed the OFB that the animal was “probably dead” in the south of Vercors.

The Ferus association files a complaint

“The fact that the collar has been neutralized so that it does not emit more, that it has detached from the neck of the animal and that it has been placed in a specific place, reflects a clear desire to inform the protective associations of nature, eliminates the scene of the fortuitous discovery of a wolf accidentally killed by a vehicle ”, considers France Nature Environnement.

“While everyone knew the position of the Valberg wolf in early November 2020, why did the OFB not report the sudden stop of GPS emissions?” Asks the association, claiming “all the light” on this matter .

Another association, Ferus, “has already announced that it is filing a complaint.”