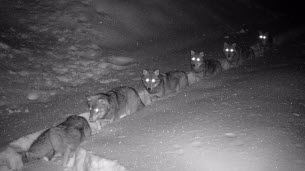 The images date from Wednesday morning, in the middle of the night, in Saint-André (Savoy), in the Maurienne massif, not far from the Italian border.

In the middle of thick snow, a pack of at least six wolves sneak into a thick layer of fresh snow, as Le Dauphiné Libéré discovered. Canids progress slowly and mark their territory. The images are incredibly sharp.

The video was filmed around 2:30 am by a Saint-André resident, Franck Pasquali, thanks to a camera trap. With a tip: “To make beautiful videos you have to urinate in front of the photo trap,” he laughs on his Facebook account, which is full of other photos of animals.

In France, the wolf population was estimated at “577 individuals” at the end of winter 2019-2020, according to the latest note from the French Office for Biodiversity (OFB), published at the end of December, which warns of “various signs” that “They are going in the direction of a degradation of wolf population dynamics.”

The gray wolf, which returned to France from Italy in the early 1990s after being exterminated in the 1930s, is a protected species. However, animals can be slaughtered, “in a strictly derogatory framework”, to combat the predation of herds. In 2021, the maximum number of “withdrawals” has been set at 110.

An old house isolated from the outside, a first for the people