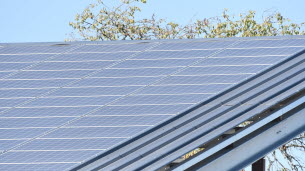 20 years ago, the first photovoltaic installation connected to the grid in the Monts du Lyonnais was connected in the town of Montrottier, announces a press release from La Ruche de l’Écologie.

At the time, there was still no purchase price for electricity, but anti-nuclear activists were convinced that it was necessary to invest in renewable energy to build the after world. Thierry Manceau recounts this commitment.

“On January 25, 2001, I met around a table at home to sign the balance of my photovoltaic installation with the electrician Serpollet Bidaut and a technician from the Phébus association (today HESPUL). Installation cost me € 9,700 at the time for just 1 kW of solar panels, or € 9.70 per installed watt instead of € 2 today. This investment was possible thanks to the support of the Phébus association which had launched a European program. In 1992, 10 years earlier, this association installed the first photovoltaic installation in France connected to the grid, right in front of the nuclear breeder Superfénix, thanks to a subscription of anti-nuclear activists. 9 years later, after having spread throughout France, a photovoltaic installation was carried out in Montrottier on the roof of a family chicken coop.

A bet on solar electricity

The facility produced 20,262 kWh through January 25, 2021. The electricity is partly consumed on site and the surplus is sent to the electrical grid. The SMA inverter continues to operate and has not experienced a fault. The pioneers remember this period because there was no purchase price yet. The installation produced ‘gratos’ in the network with a mechanical or electronic EDF meter pending the first decree that required the purchase of solar electricity ”. Montrottier’s electronic counter couldn’t go back. A blind militant bet on the future of photovoltaics and its profitability. The most important thing was to demonstrate that renewable energies had no impact on the environment and could replace a deadly and polluting industry like nuclear.

The candle is not an invention of environmentalists

“The mayor of the time refused to allow the installation of solar panels on the roof of the house because he considered it ugly. A very selfish vision without any projection on the energy future of the country. After several scenarios, we found a compromise on the roof of a chicken house built specifically for the facility. What a pain to explain to these elected conservatives that this was the future and that we had to get out of the archaic age of nuclear power. The belief in a return to sailing is not ultimately an invention of environmentalists, but of those who feared this energy transition in the territories. “

This symbolic anniversary in the Monts du Lyonnais now demonstrates that the shift towards renewable energy is possible and very real. Many citizens have embarked on the adventure and are no longer afraid to equip their roofs with solar panels to produce renewable electricity without impact on the environment, the press release concludes.