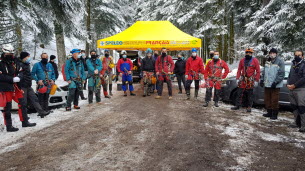 This weekend, twenty-six volunteer cavers and two doctors participated in a life-size evacuation exercise in the Vaux-Saint-Sulpice cave in the Plateau d’Hauteville commune.

This long-known cave has regained renewed interest in recent years thanks to the important work done by the local club. It develops more than 8 km of galleries. A new access gives access from the roof through a 50 m deep shaft, to the largest rooms of the cave … It is in this part where the different work groups took turns to evacuate a fictitious wounded man.

Ingenious transport systems and rope counterweight systems allow small teams to quickly evacuate a stretcher. The technicality and the know-how added to an impeccable group cohesion have allowed beautiful manipulations, but also a real transmission of knowledge between young and old already well acquired to the cause.

To carry out this mission of public service, special care has been taken in the implementation of the reinforced health protocol, in particular with the arrival of two doctors for the clandestine phase.

The rescuers, all masked, divided into six groups, five underground and one above ground. To optimize this protocol, an original radio and video relay system relayed the background images. The department and emergency services are organized around a plan and an agreement in collaboration with the prefecture and the SDIS (Departmental Fire and Rescue Service). “Already complicated by nature, the organization of these exercises and manipulations is a feat when it is necessary to apply a reinforced health protocol. “

The SSF is a commission of the Ain caving committee. The latter, in addition to this safety aspect, coordinates the entire practice and participates in the inventory and management of cavities and karst in the department. In the Jura mountains, the Rasse chasm is more than 650 m deep and the Falconnette underground system in Bas-Bugey totals more than 23 km of galleries.