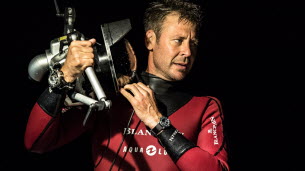 In July 2019, the diver and naturalist photographer Laurent Ballesta spent 28 days at the bottom of the Mediterranean, accompanied by 3 companions. This mission, dubbed Gombessa V, was a world first.

In his latest book, “Planète Méditerranée” (ed. Hemeria – 304 pages – € 69), the underwater explorer gives us his most beautiful photos.

Divers happen to spend a few minutes below the symbolic 100 meter deep bar. But these events are still rare, because to descend so low, it is necessary to decompress for long hours using expensive machines and be able to withstand the cold and constant pressure of the seabed.

However, Laurent Ballesta and his team did 2-3 hour dives, sometimes twice a day, every day for almost a month.

The renowned photographer confirms it: “In 28 days, I spent as much time in more than 100 meters of depth as during the last ten years”.

The turret in which divers descended into the depths.

In order to accomplish their feat, the four men were locked up for 28 days in a module dubbed the “batyale station.”

The team lived in a 5m2 cabin, plus 2m2 of sanitary facilities. Even astronauts have a larger living space when they enter orbit.

To avoid the long decompression hours required for deep diving, the station’s atmosphere consisted mainly of Helium with a pressure 13 times higher than normal.

Laurent Ballesta and Yanick Gentil in the living space of the Batyale station.

In addition, for security reasons, the team was filmed 24 hours a day by 17 cameras spread throughout the resort, bathroom and toilet included!

You might think that this isolation weighed on Laurent Ballesta. No, answers the adventurer from the seabed. “It’s almost a form of cowardice. Being locked up in the station, I no longer had the ability to lead my own expedition.” A relief for those who have always preferred maritime exploration to management.

The hardest part for Laurent Bellesta and his team was the cold in the depths. “We suffer more from the cold than in Antarctica.”

However, the temperature is not that low, 14 ° C on average, far from the -1.8 ° C of the Southern Continent. But two physical phenomena increase the feeling of cold.

First of all, the high pressure underwater makes the wetsuit’s insulation not work, or almost not. “It is as if our skin is directly touching a frozen metal plate,” says the photographer.

And then, to breathe these extreme depths, divers use a gas mixture made up mostly of helium. However, helium is very conductive and greatly increases the feeling of cold.

The discovery of an unexplored world

Why so much suffering? Simply to discover a still virgin world, or almost, from the palm of Man.

Laurent Ballesta and his team were able to observe – and photograph – hitherto unknown species.

“To tell the truth,” says the diver, “for some, I didn’t even know they existed, so I couldn’t fantasize about finding them.”

One of his favorite photos is that of the Parrot Barber (see above), a species that he knew without ever having seen. “There were only photographs of this dead fish. It had never been seen alive.”

Other images are filled with palpable emotion as scientific knowledge blends with the beauty of the image.

This is the case of this photograph that shows the marbled squid in full reproduction (see below), a species that dies very quickly after mating. “They are here, doing everything they can to bring life, and I know they are going to lose it soon.”

To finish his book, Laurent Ballesta did not settle for 28 days of saturation, he took advantage of twenty years of diving. In total, 85,000 photos were collected and only 212 were selected to illustrate the book.

“I realized that half of the photos had been taken during the 28 days and the other half during the previous ten years,” reveals the underwater adventurer.

Good news for him, because it means that the photographic species has not yet traveled and that there is still much to discover in the depths.

The project of your life

The Gombessa V project took eighteen years to build. Contrary to what one might think, it is not the technological limits, or even the financing that has taken the longest, but the legal framework that needs to be reformed.

To prevent divers, often employed by large tankers, from taking too many risks, the law drastically restricted this type of deep diving.

Maybe it’s luck that you had to wait so long. “Looking back, I tell myself that I feel really good that it took all this time,” admits Laurent Ballesta.

Not only the technology, but also the personal experience of the diver, allowed him to capture images of a much higher quality by his own admission. “I think that, in terms of photography, having reached a different maturity than I was twenty years ago.”

In the depths of twilight, there is less than 1% of the surface light. Therefore, it takes extremely sensitive cameras and a lot of experience to reveal your hidden beauties.

“The Mediterranean is not dead”

Laurent Ballesta is a specialist in the Mediterranean, but that is not why he chose to photograph this very special sea. Two reasons motivated it.

First of all, it is to oppose the Mediterranean coup.

“Every time we make the headlines with this sea, it is to tell us about its pollution, the photographer laments, I know it is a reality, but just by talking about it, many many people think that the Mediterranean is dead. But it is because he is injured that he is not dead. “

I really wanted to surprise people by saying: look how beautiful it is again!

And then, behind the photographer, there is also the naturalist.

“There are many adventure projects in which children deploy considerable resources, in the service of what? Their ego”, despairs Laurent Ballesta.

He was eager to advance science and, in particular, to validate his method of exploration. And what better way to do that than to get results in a place that no one expected?

“If he had taken the bathyal station to the depths of Papua or Antarctica, of course he would have discovered wonders, he admits, there had to be a place where people did not go. Do not expect to be surprised and where, surprised, you wonder how I could have surprised them. “

In addition, now that he knows that his method works, he has already planned another underwater trip with his team next summer around Cape Corsica, if the situation of the pandemic allows it.

In the depths, losing sight of the turret can spell death.

Ecology: neither pessimistic nor optimistic

As for the ecological situation of the planet, “I am neither optimistic nor pessimistic”, declares Laurent Ballesta.

“The pessimist says he is screwed and does nothing. The optimist says that he will improve and does not do more. Optimistic and pessimistic are two sides of the same coin. medal, that of resignation “.

Laurent Ballesta considers himself a realist who has very few illusions. “I think we will go further through the wall. But I’m not too worried about the oceans. They will recover from the ‘human beings’ episode.”

Why not have photographed the waste present in the Mediterranean, one of the most polluted on the planet?