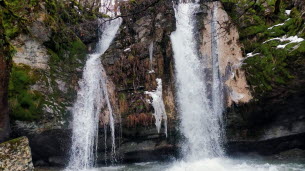 The heat of recent days, accentuated by showers and the south wind, accelerated the thaw causing an impressive influx of water that swells the beds of the Albarine and Mélogne, a torrent that receives the thaw in the northern area of ​​Praille. This premature debacle offers a great spectacle around the waterfalls, such as the Charabotte waterfall, which can be admired from the viewpoint installed at the top of the Tenay road. From there, a great natural spectacle is offered that allows you to appreciate the strength and power of nature. Upstream, the Albarine, which has its source in the Léchaud valley in Brénod, has emerged from its channel. It leads to the Charabotte circus in a deafening roar, to crash 115 meters below, dotting the passage of these cliffs that never so deserve their title of natural artistic monument classified since 1909.

Jets of water that turn iridescent with the colors of the rainbow at the slightest ray of sun, colliding in the three levels of this waterfall. Around him, the mountain that can no longer contain this flood, lets out ephemeral resurgences called Demoiselles, in the limestone wall where the peregrine falcons and the tichodrome echelette soon nest, while binoculars can surprise the herds of chamois that are have installed in this rugged landscape.

More accessible is the Mélogne waterfall, a stream that settles after crossing the D8 bridge that connects Hauteville with Cormaranche. We arrive at the foot of what we call the “forgotten waterfall” after crossing the Mélogne by a wooden footbridge. A place steeped in history because in the past, several mills worked according to the waterfalls of the torrent. As evidenced by the remains of limestone structures, vestiges of the use of the motive power of water to operate artisanal sawmills. The Mélogne mill, built in 1495, will function until the war 14-18, then a fire, just after the last war, will condemn it definitively. A little further up, between the Croix du Grapillon and the old quarry of La Touvière, you can admire the Trou de la Marmite waterfall from a distance. In fact, its very steep access road is not recommended for soft terrain. A magnificent waterfall, which continues with the many jumps made by Mélogne, before reaching the Albarine.