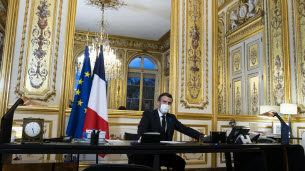 Emmanuel Macron and Joe Biden have “observed a great convergence of views” on the main international problems, in particular to fight against Covid-19 “in the framework of the WHO” and on the climate after the return of the United States to the Paris Agreement, the Elysee said on Sunday.

In their first telephone interview since the US president took office, the two heads of state also expressed “their desire to act together for peace in the Near and Middle East, in particular on the Iranian nuclear issue,” the presidency said in a statement.

This “friendly and working conversation” was held in English for an hour, it took place in the French president’s entourage.

For its part, the White House indicated that Joe Biden had affirmed to Emmanuel Macron “his desire to strengthen bilateral ties” with France, “our oldest ally”, but also “the transatlantic relationship” by “through the Association of the NATO and the United States with the European Union ”.

Emmanuel Macron welcomed on Wednesday, the day of Joe Biden’s inauguration, Washington’s decision to reestablish the Paris climate agreement and the World Health Organization (WHO), signaling his return to multilateral institutions after four years of frenzied unilateralism under President Donald Trump.

The two leaders agreed on the need to coordinate on “common challenges such as climate change, Covid-19 and the recovery of the world economy,” according to the White House press release.

“They also agreed to work together on shared priorities in foreign policy, particularly in China, the Middle East, Russia and the Sahel,” he said.

On all these issues, the two presidents “have agreed to maintain very close contact in the coming weeks,” according to the Elysee, although at the moment a physical meeting cannot be arranged due to the Covid-19 crisis.

Macron and Joe Biden met for the first time on November 10, after the election of the president of the United States.

The Elysee Palace said Sunday that the French president had been “sensitive” to the reference to the French origins of Joe Biden, who took an oath on a family heirloom, a Douai Bible more than 400 years old.