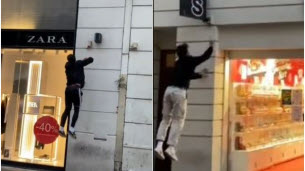 To fight against light pollution, two 17- and 21-year-old Marseillais have fun turning off the neon lights of closed shops. To do this, they indulge in parkour, an acrobatic discipline that consists of overcoming obstacles with fast and agile movements.

This allows them to press the switches of the stores, placed in height, and incidentally make noise in Tik Tok.

Cartwheel to turn off the illuminated signs

At the end of the afternoon, on January 18, these teenagers are filmed doing cartwheels in the middle of the street, near the shops of Marseille. Ready-to-wear boutiques, jewelers, hairdressers … The acrobatic duo does not miss anything.

They edit the video into a catchy hip-hop track and post it on Tik Tok – instantly, the video hits the mark.

According to his testimony, given to our colleagues from France 3, on January 18 they met a patrol from Bac, quite intrigued by the two friends’ jumps. “We explained that we were turning off the lights. And the police said ‘okay, okay,'” France 3 reports.