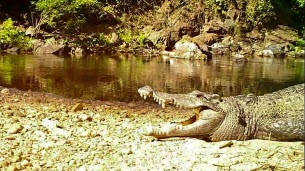 An endangered Siamese crocodile, estimated to be 3 meters long, has been sighted for the second time in ten years in Thailand’s largest national park, according to photos released by authorities on Saturday. Park.

This freshwater reptile was photographed using a photographic trap (which allows, as the name suggests, to catch an animal on its way by shooting a photo) while sunbathing on a shore after coming out of the water, in Kaeng Krachan National Park , in the border area of ​​Thailand with Burma.

There are about twenty individuals of the species.

Once ubiquitous in Southeast Asia, this species has drastically declined in the region. It is currently classified as “critically endangered” on the IUCN (International Union for Conservation of Nature) Red List, which is the world’s most comprehensive inventory of the general state of conservation of plant and animal species.

National park officials estimate that only about 20 remain in the wild due to hunting and habitat loss.

The images of this crocodile, never seen before by authorities, were taken in December and are “proof that Kaeng Krachan National Park is an important area for wildlife conservation,” said Manoon Prewsoongnern, a park manager. who works with the NGO World Conservation Society. The reptile is estimated to be around 10 feet long, he said, adding that this is the second time in ten years that such a specimen has been seen.

“The Siamese crocodile is a predator, but it is also one of the first victims of human damage to nature. Being able to see it is therefore proof that the park’s environment is preserved,” he said. additional.

The animal is particularly sought after by poachers: they supply eggs and adult reptiles to farms in the region, the skin of which is used to make luxury belts, shoes and bags.

Almost 20% of the food wasted in the world