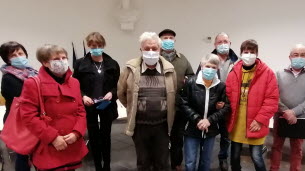 This year, only one category was selected for the flower-filled houses contest, namely houses with a garden highly visible from the street. Gérard Coillet, assistant for the living environment, praised the efforts of the participants “who contribute every year to the beautification of the city’s neighborhoods”.

Clean and well-kept grounds despite very specific conditions this year

The competition took place in very specific conditions, a long confinement in early spring, a particularly hot summer that caused a drought, the new municipal team set up late, which caused the jury to pass in early September. Despite all these events, it must be recognized that the sites visited were clean and well-maintained. So much so that, despite a severe score, all nine participants were tied.

“We wanted to hold this awards ceremony, which allows us to meet, in a small committee this year with only one representative per household, knowing that we will not be able to share the friendship cup, etc. “It’s a shame,” concluded the elected official. Many prizes were distributed for each entry, gifts provided by generous sponsors, and accompanied by a rose bush offered by the city.

See you on March 26 for an online movie-discussion on family farming and pesticide alternatives.

Lyon. Against the “bad bzzz” of neonicotinoids, the hitting action of Extinction Rebellion