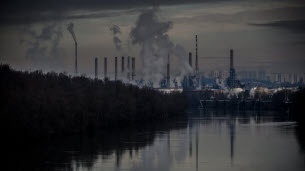 Increased respiratory and cardiovascular risk, but also of developing glaucoma… The dangers associated with air pollution are better and better documented.

And quantified: in its latest report published at the end of November, the European Environment Agency (EEA) estimated that in 2018, 417,000 Europeans from 41 countries had died prematurely, after being exposed to fine particles. mainly from industrial and transport activities.

By fine particles, EEA means particles with a diameter less than 2.5 micrometers: these are the famous PM2.5, which penetrate deeper into the respiratory system.

Since Monday, January 4, their airborne concentration levels have been made public through approved air quality control associations such as AirParif, Atmo Occitanie or Atmo Grand Est.

Until then, only PM10 (with a diameter of 10 micrometers) were counted in France. A decree published in July changed the situation.

In addition to PM2.5, the new Atmo index still provides information on levels of pollution with ozone, sulfur dioxide and nitrogen dioxide.

But it is no longer reserved only for agglomerations of more than 100,000 inhabitants. The entire metropolitan and overseas territory (with the exception of New Caledonia) is now affected. Therefore, you can know the air quality at the level of your municipality.

This new rating, along with the inclusion of PM2.5, will likely increase the number of days that air is classified as “Bad” or “Extremely Bad”.

A mechanical increase, linked to the new calculation method. In fact, still in its last report, the EEA indicated that in Europe, air quality had improved significantly in the last ten years.