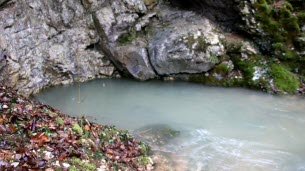 After heavy rains and thaw in the Jura, the flow of the Suran has increased significantly. Not only does it overflow into the surrounding meadows, but its resurgence in the Ain River is again visible.

These revivals were identified after staining campaigns. The dye was introduced into a residue in the Suran, under the Mas Bertin bridge, in Villereversure. After traveling about ten km, the groundwater feeds three sources that lead to the River Ain in Neuville.

The “Grotte des Gaulois” is an impenetrable cavity that acts as a temporary fountain, with a siphon at the end of the entrance porch. This “rolling mill” opens at river level. The third source is located about ten meters below the surface. The “Grotte des Gaulois” is accessible from the Chemin de la Colombière and currently shows a significant flow.