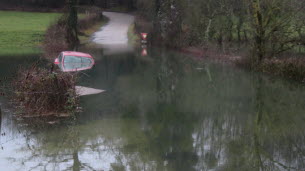 This is a mishap this motorist would have done well …

On Friday morning, this driver, surprised by the sudden rise of the water on the La Rousse road while taking this municipal road that joins the hamlet of Thioles, was forced to abandon his car after losing control.

A simple exit from the road without consequences against a bush when the water level was not a cause for concern. But a few hours later, and although he had not yet cleared his vehicle and the rainfall had redoubled in intensity, the man was the victim of the sudden rise in the waters of this dry river, La Rande, which takes shape between Dhuys and the forest de Clapay en Chavannes, in the city of Nivigne-et-Suran. The water level rose very quickly, to the point of submerging the car’s engine.

A phenomenon that has already occurred twice in the space of two months, symbolizing the karst phenomena that characterize the valley in periods of heavy rains.