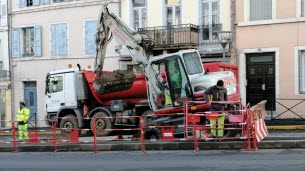 In the city, the installation of underground garbage containers continues, a project led by the Puy-en-Velay agglomeration community. Earthworks are underway in the back alley of Carnot Boulevard.

Parking in five spaces and traffic in the back alley between the L’Arlequin bar and the Calip’so institute is prohibited until January 29. The container crane will be done on Monday afternoon. It may be worth a look.

In the same sector, avenue de la Cathédrale, the container has been placed but the improvements in the environment will continue until January 29, which translates into a narrowing of the road. Rue de Monferrant, the works were interrupted, and probably abandoned, by the discovery of networks that did not appear in the plans.