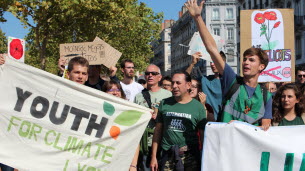 He went ! A group that brings together some thirty organizations with an ecological tendency, militates for the decline of a citizen convention for the climate at the regional level. Among them are the famous Youth for Climate associations that brought together thousands of high school pupils and students on the streets of Lyon during the marches organized in 2019. There is also Greenpeace, Alternatiba, Attac, Citizens for Climate, Citizens for Renewal of democracy, natural environment of France, La Ville à Vélo … etc.

It is up to the candidates to position themselves

“On the basis of a document prepared by civil society, we are going to ask the candidates for the regional elections to express themselves, to say if they want to commit to establishing this regional climate convention. We can imagine that it will not be accepted like this, without conditions, but that it will be a document drawn up by a large number of citizens and associations. In this it will have real legitimacy ”, developed Marin Bisson, present on Thursday in Lyon.

For the Collective also represented by Andy Battentier and Anaïs Jacquet, it is also about learning from the failures found by the National Climate Convention. Created in October 2019 by the Economic, Social and Environmental Council (EESC) at the request of the then Prime Minister Edouard Philippe, this convention made up of 150 drawn citizens sees many of its proposals put aside.

It is no mystery, the approach is political by a “not apolitical, but partisan” Collective, which is aware that certain parties, more to the left than to the right and more “green” than The “conservatives” have already thought about set up such a convention. Thus, Fabienne Grébert, EELV candidate for the June 2021 Regionals, appears more “compatible with the climate” with the approach launched, than Laurent Wauquiez, current president of LR, to speak only of those who are already ready to leave. .

If successful, Auvergne Rhône-Alpes will not, however, be the first region to embark on the path of a renewal of democracy. Occitania, led by the socialist Carole Delga, has already created a citizens’ convention to decide its future.