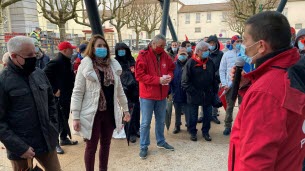 The inter-union of EDF and its subsidiaries (made up of CGT, CFE-CGC, CFDT and FO) does not want the project called “Hercules”. The government wants the reorganization of the public FED group into three entities. This Friday morning a new demonstration took place in the streets of Ambérieu-en-Bugey. It brought together about 90 people. In Ain, parliamentarians have been alerted.

This time, the deputy of the presidential majority party (LREM), Olga Givernet, went to Ambérieu. After the parade in the city center, a dialogue took place and the parliamentarian took note of the arguments of the intersunion.

For the four union federations, this project “breaks the EDF group and represents a real threat that affects the public electricity service, employees and French citizens. This dismantling would mark the end of EDF’s reason for being at the service of the general interest. “

The LREM deputy was clear: “I listened to the trade unionists and we talked. Discussions on this project continue. We want this EDF company to be integrated and I would like this project to be successful. “Olga Givernet added:” EDF must be efficient and must meet the needs of the French. We also need to renegotiate this tariff issue. “

A new union meeting, regional this time, will take place on Tuesday 19 January near the Cusset dam on the Rhône.

What partnership will bring Dole’s Shared Gardens to life?

Metropolis of Lyon. The city of Sainte-Foy-lès-Lyon launches its game “your look at the cable car”