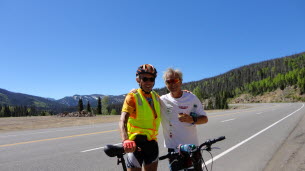 In Ceyzériat, on the way to the station, visiting René Girard is like touching a life-size map of the world. It is dreaming of African deserts, Canadian lakes and forests, Alaska, or being on the mythical Route 66 that crosses the United States.

In fact, he accompanied his cousin Serges Girard during his extraordinary challenges: touring the European Union or crossing the United States on foot. Their role is to stay in the motorhome and prepare rations of food for the athlete that is served every five kilometers. The latter can run from 75 to 104 kilometers a day, so two of them follow him in the vehicle to avoid possible breakdowns as well.

An ecological project for 2021

“I have traveled 61,569 km since the beginning of my adventures and have crossed 96 states in whole or in part. I was present at the races and crossings for 806 days during 14 years between 2006 and 2020 ”, remembers René Girard. Figures that make the man his friends nickname “the crazy follower” dizzy.

In 2019, the double performance of New York’s Normand Patrick Malandain followed, who joined Los Angeles running. Arriving in Los Angeles, after a connecting stretch by car, Patrick Malandain departed from Vancouver in Canada to Halifax on the east coast. A round trip of almost 12,000 kilometers for the runner and his accompanying team. At 72, René Girard’s passport still remains not far from his suitcase.

In 2021, he will embark on the green project Run for planet and support his friend Patrick Malandain for the second time. In his sights: the preservation of the world’s largest forest in Russia. Departure scheduled for April 4 in Montreuil-sur-mer (Pas-de-Calais), and after 12,600 kilometers of running, or about 15 million strides, he reached Vladisvostock in Russia. 180 days of racing, without rest, at a pace of 70 km per day.

“We want to plant 15 million trees in Siberia, or Patrick Malandain’s 15 million steps,” explains René Girard. The project is carried out with the skills of universities and forestry professionals in Russia. Our advisers are French and Russian scientists, specialists in cold forests. “

Antoine Abou wants to know everything about hydrogen

Where to store your Christmas tree in the city

The interest of bocage hedges explained to students