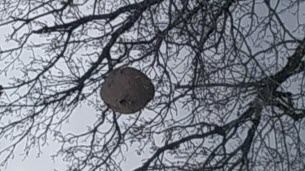 During this winter period, the trees are uprooted from their foliage, revealing in broad daylight nests of Asian hornets, recognizable by their imposing size. On Sunday morning, the gaze of a walker who was walking near the Chavanay road, in the town of Pélussin, was attracted by a huge ball, suspended more than ten meters high, on a branch. He photographed the nest as big as a soccer ball before giving us the snapshot.

Vincent Vey, president of the Loire apicultural health defense group (GDSA), confirmed to our editorial staff that it was indeed an Asian hornet’s nest “it has a very good size of 60 to 70 cm, some can go up to a meter,” he explains.

“As we enter the winter period,” he says to reassure the population, “the nests are not active. As soon as it’s cold, the hornets go to sleep and the entire colony dies. Only the queen will survive and overwinter under a tile or in the ground, hidden somewhere. If it does not die during the winter, it will come out next spring and make another nest, in another place ”.

And the president of the GDSA to make a reminder stinger “The Asian hornet can be dangerous to man when he gets too close to the nest.” It is also formidable for the bees whose colonies it devastates ”. The only solution to eradicate it or at least slow down its progression is still the destruction of the nest that can house, “between a thousand and two thousand individuals.”

The GDSA president warns of the growing invasion of this hymenopteran insect species, coming from Asia, which continues to gain ground in France and the Loire. “There were some isolated cases in Pilat a few years ago, but today it is settling permanently and in number in our territory.”

In 2020, the regional platform (1) that invites anyone to report the presence of an Asian hornet listed 99 declared and confirmed cases and 48 declared and confirmed nests, of which 18 nests were destroyed in the Loire. Vincent Vey confesses that these figures are below reality, arguing that “some people may have called a pest controller directly or the fire department may have intervened without revealing it.”

When an owner discovers an Asian hornet nest on his private land, its destruction, through a specialized company, is his responsibility (€ 130 to € 160 on average). On the other hand, the operation is carried out free of charge by the firefighters when the nest is located in the public domain. Although classified as a second category health hazard, the GDSA does not benefit from any help from public authorities to combat the extremely rapid proliferation of this species of insect that has no predator.

That is why Vincent Vey took his pilgrimage baton to sensitize the communes of communes of the department so that they released funds to participate in the financing of the destruction of the nests, the only alternative to stop the intrusion of the Asian hornet in the Loire. .

(1) Any person who suspects the presence of the Asian hornet (nests or individuals) in a departmental area is invited to make the report on the website: www.frelonasiants.fr

Champagnole. Reduce the weight of household waste, Sictom’s challenge for the next six years