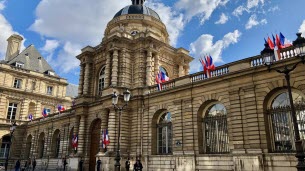 Will we have to choose between technology and go back to sailing? This is the issue on which the senators are working, who began this Tuesday in first reading the examination of the bill “to reduce the environmental footprint of the digital.”

A text that transcends partisan labels, as it is carried by Patrick Chaize (LR, senator for Ain), Guillaume Chevrollier (LR, senator for Mayenne), Jean-Michel Houllegatte (PS, senator for La Manche) and Hervé Maurey (Eure, Centrista Union), and signed by more than 130 senators from all sides.

In the French strategy to achieve the goals of the Paris Agreement, digital technology is largely ignored. This is the finding of a Senate information report that was released last year. However, the sector’s impact on the environment is far from insignificant.

This is precisely the objective of the text that the Senate is currently examining, which includes more than twenty proposals aimed at reconciling digital and ecological transitions.

First angle of attack: consumer information, which senators want to strengthen to sensitize them about the impact of its uses. The text provides, in particular, to address the issue of digital sobriety at school, and the establishment of a specific module in the training of computer engineers.

Another set of measures aims to limit the renewal of terminals, responsible for more than 80% of greenhouse gas emissions linked to digital technology in France (televisions represent 25% of this total, laptops 14% and smartphones 13%). Pollution generated mainly abroad, during its manufacture or during its transport.

The senators, therefore, propose to make effective the crime of planned obsolescence, for the moment largely theoretical. They also propose to sanction the obsolescence of software and extend the duration of the legal guarantee of conformity of digital products from two to five years.

The bill also seeks to promote “ecologically virtuous” digital uses, in particular by making “eco-design” of websites mandatory and by “promoting environmental regulation” to avoid increased consumption and emissions from networks and data centers.

Senators want, in particular, to ask operators to sign by 2023 binding multi-year environmental commitments with Arcep, the telecommunications police, for example, to reduce the impacts associated with the manufacture and use of “boxes” made available to your subscribers.

Some sixty amendments were tabled for consideration of the text in the Hemicycle. The environmental group, which considers the bill as “an important first step”, wishes to “strengthen” its ambition, proposing several additional measures, such as experimentation by local authorities of instructions on certain digital equipment, or an evaluation of environmental impact of new technologies such as 5G.

If approved, the text will go to the National Assembly for a first reading. For its part, the government seems open to certain measures proposed by senators. “I am not closed to the fact that we can advance on a series of interesting points,” said Cédric O during his hearing at the Land Management Commission, adding that the government adds, “in general,” “to the objectives of the bill. “.

In some places, a regulatory approach is adopted, while we favor an incentive approach, ”added the secretary of state in charge of the digital transition.

Loire. A new wastewater treatment plant will be built in Saint-Victor-sur-Loire

RHONE. Up to 15 centimeters of snow is expected this Friday

Rhone. “We want the sun! This greyness that depresses the Lyonnais