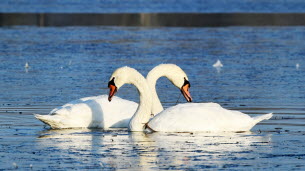 “A case of highly pathogenic avian influenza H5 was confirmed in five swans found dead in three ponds in the city of Arthun. In a statement sent Tuesday evening, the Loire prefecture announced the establishment of a “temporary control zone” in eight municipalities of Forez.

All birds must stay indoors

This control zone means that all poultry, including backyard and other captive birds, must be kept inside buildings at all times.

The prefecture also specifies “that no bird, no product of the poultry kept (meat, egg) or in relation to its place of detention (food, garbage, abatement …) must leave the farms, commercial or non-commercial . If their consumption does not present danger for the human being, these products can constitute vectors of contamination for other birds. “

As for the movement of people, pets or vehicles within the farms, they should also be limited to the maximum.

What municipalities are concerned?

All are located within a radius of 5 kilometers around the swans found dead.

Another measure taken after the establishment of this “temporary control zone”, veterinary visits. “They will be systematic and will make it possible to verify the strict application of containment and biosecurity measures in each farm that is carried out. “

If, at the end of all these visits, no suggestive sign of avian flu is detected on the farm, the “temporary control zone” could be lifted, according to the press release.

During the entire maintenance period of this control area, greater surveillance of the birds will be carried out.