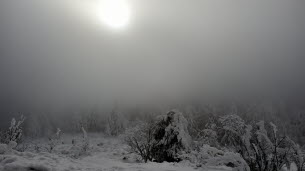 The record for the two departments is set at Col de la Loge, on the Forez: -9.4 ° C at 8 in the morning. Just behind is the Stables station, the highest in the Haute-Loire, which rises to the podium with -9.3 ° C. Also note that the Saint-Anthème station in Puy-de-Dôme reached -10 ° C.

The wind accentuates the feeling of cold

Gradual but restless redness during the week.

This cold weather is expected to continue on Monday before gradually warming up the following days, accompanied by a bit of snow on Tuesday. Between Thursday and Sunday new precipitations are announced, snowfalls in the reliefs and in the form of rain in the plains and valleys.

The whole department has its thick white coat