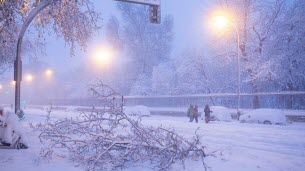 Stranded motorists, the airport closed, skiers or sleds in the streets and the army to the rescue: a snow storm this Saturday paralyzed part of Spain including Madrid, where the worst was yet to come due to the steep falls that are still expected on the day. Authorities said at noon that three people had died from inclement weather.

“If despite extremely difficult weather conditions, the number of incidents is relatively limited, we regret the death of three people,” Interior Minister Fernando Grande-Marlaska said during a press conference, without providing details.

“Let us avoid travel and follow the indications of the emergency services. Let us be extremely vigilant in the face of the storm Filomena,” the President of the Government, Pedro Sánchez, had tweeted shortly before, praising the work of “professionals who are trying to help people trapped by snow. “

In Madrid, the capital, “the situation is very serious,” its mayor José Luis Martínez-Almeida warned on Twitter, asking residents not to leave their homes while the storms laden with snowflakes continue. descend on the city without stopping since Friday night.

“We are working to clear access to hospitals as quickly as possible but frankly it is complicated while it is snowing,” the councilor, who had obtained reinforcements from the army on Friday, told La Sexta television.

The military emergency unit thus intervened on many roads, in particular with its snow plows, to come to the aid of motorists trapped by snow. According to the emergency services of the Community of Madrid, on Saturday morning no less than 1,000 vehicles had been released.

All schools, from nurseries to universities, will remain closed on Monday and Tuesday, announced the president of the region Isabel Díaz Ayuso, waiting to see the evolution of the situation. Parks are closed there, public buses suspended and garbage collection.

The Madrid-Barajas International Airport, closed since Friday night, will keep its doors closed this Saturday for security reasons, while on Friday some thirty flights have already been canceled and almost the same number have to land elsewhere.

aid for more efficient housing with the CCFE

Saone and Loire. The sandy sky on Saturday, a natural pollution