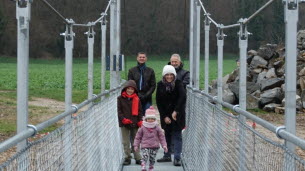 The Gère, emblematic river of our region, runs through the village of Eyzin-Pinet. Very calm river in general, it has impressive and devastating floods.

To avoid this, in 2019, upstream from the Chez Durieux village, a restoration of the banks of the Gère was carried out to restore the space in the watercourse bed.

Many walkers reaching the shore found themselves trapped, unable to cross. In fact, on both sides of the river there is a rural hiking trail that leads up to Recourt, through the forest.

Bridges existed, each time engulfed by floods. During torrential rains, such as on September 6, 1946: “La Gère overflowed everywhere, the waters gradually spread over the meadows. […] The width of the Gère sometimes reached 1 kilometer, the beet and potato fields were destroyed. “*

The bridges suffered, like the bridges, including the one that is in this place that was swallowed by the waters. It has been rebuilt. According to these same writings, Gère experienced other floods as in February 1947, November 1950, 1983, then in 1993.

It was on this date that the footbridge disappeared again, swept away by the waves and since then, the hikers stopped or waded, when the height of the water allowed, at the risk of falling on the wet pebbles.

The project of the city council that chose to put a footbridge in the Himalayas was appreciated. Width of 0.90 meters over a length of 25 meters, it is sized at 130 kg / mL for a maximum of five people.

The catwalk is functional but has not yet been inaugurated. Many people have started to borrow it.

Justice. Agent Orange and Bayer-Monsanto at the dock

Sarcey. Banners along the RD67 to save coverage