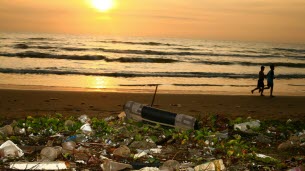 São Conrado Beach, located in an exclusive neighborhood in Rio de Janeiro, Brazil, was covered in trash in early January. Onlookers could see that thousands of plastic objects had been washed, HuffPost reports.

The Mar Urbano Institute, a Brazilian non-governmental organization, posted a video on Instagram showing the scale of the disaster. Bottles, bags, soccer ball, or even a doll’s head: trash covers much of the sand on the beach.

Brazil, a major producer of plastics

According to the NGO, the waste found got there in various ways. First, there are those that were thrown into the wild before reaching the sewers. There are also those that were dumped directly on the waterways and joined the Atlantic Ocean. Not forgetting those that were left in open dumps and that were blown away and those that could not be eliminated by the cleaning circuits.

Brazil is regularly noted for its mismanagement of recycling. However, the country was the fourth largest plastic producer in the world in 2019 according to WWF. According to the Mar Urbano Institute, “there are approximately 325,000 tons of plastic that reach the sea each year in Brazil.” For the non-profit organization Oceana Brasil, 80% of the waste that reaches the ocean comes from the land.