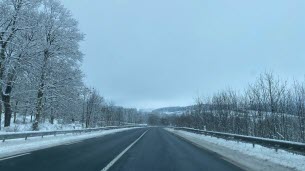 The plot of the road has been difficult to traverse since Monday, due to the snow and the cool temperatures of the beginning of the year. By the end of the afternoon, heavy vehicles were in a delicate position at Polignac, causing a temporary closure of RD136.

The circulation of road sets on the RN88 in the direction of Le Puy-en-Velay / Pradelles was also prohibited and special equipment was made mandatory for all vehicles in this sector until Tuesday morning. The storage of these heavy vehicles was also installed in the “Fangeas” in Solignac-sur-Loire pending the break.

There were also several minor losses of controls in Saint-Didier-sur-Doulon (where a car hit a stone bridge) and in Chaspuzac, on Monday, but also in Bas-en-Basset, on Tuesday morning.

Others were more serious, such as the face-to-face meeting that took place in Raucoules on Monday shortly before 4 pm, after a detour made by a motorist. The two vehicles collided and the two drivers (women 46 and 47 years old) were evacuated in Firminy and Le Puy-en-Velay.

A little earlier, around 3 in the afternoon, a 34-year-old man lost control of his Renault Espace in the snow of Langeac. He was slightly injured and transferred to the Puy-en-Velay hospital.

Finally, around 8pm on Monday night, in the town of Chomelix, a Volkswagen Touran pulled off the road at a place called “Pigeyres”, on RD1. The 32-year-old motorist suffered minor head injuries and was taken to Craponne-sur-Arzon hospital for examination. The gendarmes detected a positive blood alcohol level in the driver.