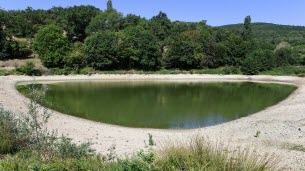 The periods of drought derived from global warming that threaten water resources, led, during the last community council of Loire-Semène, to the vote of a motion aimed at increasing water resources.

Taking the opportunity to review the Loire-Bretagne Sdage (master plan for the development and management of water), the Region offered its solution to all EPCIs (public establishments for inter-municipal cooperation), including that of the Loire. -Semene.

The motion of the Region was adopted

For Auvergne-Rhône-Alpes, “the current Sdage is not very favorable to storage and increased availability of water resources.” It proposes “to develop its storage in all its forms, in order to increase its availability, and calls for the removal of all restrictions on the limitation of upstream uses. “

According to this motion, the economic and social development of the rural territories upstream of the basin depends on it and requires solidarity between the territories upstream and downstream. President Girodet stressed “the insufficiency of the water tables of the mountainous territory.” Hence, according to him, “the need to be able to store water for drinking water, industry and agriculture needs. “

The motion of the Region was approved without discussion with one abstention, that of Nadia Adjeriou, from Pont-Salomon. It is not unanimous everywhere, in particular: in the Agglo du Puy-en-Velay (3 votes against and 9 abstentions) and in the community of municipalities Marches du Velay / Rochebaron (4 abstentions).

What’s your opinion on storing water to promote artificial irrigation?

“It is a short-term vision. It is very ineffective because it leads to evaporation and worsens the state of the groundwater table a little more, dries the soils more and further reduces their fertility. Promoting the storage of agricultural water involves two fundamental uses: access to drinking water and maintaining a good state of natural environments. “

What do you propose ?

“The first place to store water is good soil and subsoil and wetlands that play a very important role in storing water. In terms of crops, water-saving agricultural systems such as organic farming, hedge planting and agroforestry must be implemented. It is also about stopping crops that have a strong need for water such as corn and replacing them with other crops that are more suitable to our different regions depending on the altitude and the nature of the terrain. “