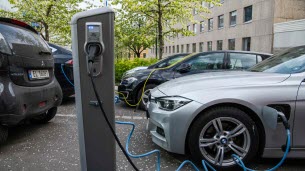 Norway became the first country in the world in 2020 where electric cars accounted for more than 50% of new annual registrations, according to figures from a specialized body published on Tuesday.

According to the Information Council on Road Traffic (OFV), electric vehicles had a 54.3% market share last year compared to 42.4% the previous year.

The four new best-selling models in the Nordic country (Audi e-tron, Tesla Model 3, Volkswagen ID.3 and Nissan Leaf) were all electric. The fifth, the Volkswagen Golf, has a plug-in version, but the statistics do not distinguish between engine types.

Norway, the largest hydrocarbon producer in Western Europe, is also a pioneer in electric mobility thanks to an extremely favorable fiscal policy.

Unlike diesel or gasoline cars, which are subject to very high taxes, clean cars are exempt from almost any tax, making them competitive to buy.
The Nordic country, where electricity is almost entirely of hydraulic origin, fuels the ambition that all its new cars are “zero emissions” from 2025.

Pollution: the department on red alert

the recipes of the Tatup bakery

Builder. Crows and locals are not good neighbors