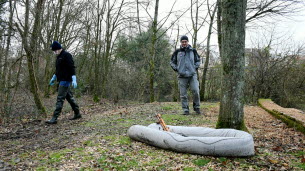 On Wednesday, December 30, at the end of the afternoon, firefighters intervened in the Baudières park due to contamination by hydrocarbons in an arm of the Reyssouze. The water police from the National Biodiversity Office (OFB) were also present.

The small-scale disaster did not a priori cause any damage to the fish and ducks, used to the river. The few liters of spilled fuel could be absorbed by a product specially added to the water. The floating dam installed on December 30 by the Pollution Control Unit (CELP) of the Pont-d’Ain emergency center, designed to contain pollution, was removed on Monday, January 4, without leaving traces of fuel.

The Reyssouze Watershed Union (SBVR), in charge of the general management of the river, has refused to file a complaint, “because we could not determine the origin of this contamination, the damage of which is difficult to assess. Quantify, but we remain vigilant. A priori , the pollution would have passed through rainwater, the Bourg-en-Bresse Basin Agglomeration Community looks on their side. Everyone participated well, there was a good mobilization “, says Alexandre Lafleur, director of the SBVR.