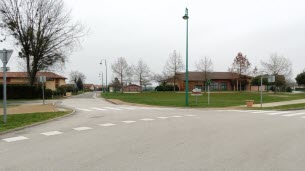 If there is a district of Etrez that has undergone a great metamorphosis over the years, it is the one that was previously called Champ Vilain (Champ Vilain-Vies de Bourg crossing).

A 1920 photo shows a space in a heavily wooded meadow, dominated by the Cross at the crossroads.

In 1983, the town acquired the land to build a sports field with changing rooms and a tennis court. The cross has been renovated and decorated with flowers.

In the surroundings, many houses have been established, mainly in the La Cornatière subdivision and, more recently, in the Petit Bosquet subdivision.

Today, children, petanque and footballers take advantage of the leisure facilities. Walkers can discover the natural space, developed during the creation of the cutout basin.

On the other hand, the city council will have lived a very calm 2020 and everyone wants to return to the premises as soon as possible.

for the FDSEA, “Enough is enough”