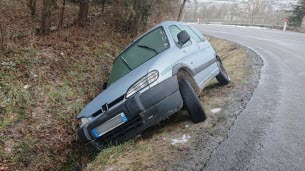 The Haute-Loire roads have been very dangerous since Saturday night. The freezing rain transformed many axes into an ice rink, especially in Yssingelais. Several material accidents were reported between Saturday 19.00 and Sunday morning, for example on the RN88 in Bessamorel or Sanssac-L’Eglise.

Firefighters still had to take care of three people

If some vehicles went to the ditch without causing injuries, firefighters still had to attend to three people after accidents on the RD500, in Saint-Didier-en-Velay. A first intervened on Saturday around 7.15pm, after the loss of control of a young 18-year-old driver, transported to Firminy.

Then a second this Sunday morning shortly before 7:30 am. Two cars collided and rescuers took care of two men aged 48 and 20, leaving a third young man in his 20s unharmed. The two victims were also evacuated to the Firminy hospital for minor injuries.

Joux / Machézal / Saint-Cyr-de-Valorges. Seven new wind turbines by 2024 between the Rhône and the Loire?

the “sustainable development” projects that will mark the coming months

Farming. The (temporary) return of neonicotinoids validated by the State Council